I was able to reschedule the Tri-State Hiking Club tour of Perryville for Saturday, November 21st. We had beautiful blue skies and temps in the 50s and 60s, making the tour enjoyable from a weather aspect. I took 19 hardy souls down to the rolling fields of central Kentucky and they all seemed to enjoy the battlefield, nearly as much as I do. I do not believe any of the hikers who were with me had ever been to Perryville before, so I had a fairly captive audience as I spoke on several facets of the battle. The museum had been recently redone (in October), so many of the attendees looked around and watched the video presentation before we set off to tramp, tramp, tramp. We covered all 27 tour stops, so we were on the battlefield for several hours.


Here, near Stop 3 I put most of the group into column as we discussed formations used during the Civil War. I think by the end of the day the crew understood the importance of flanks! 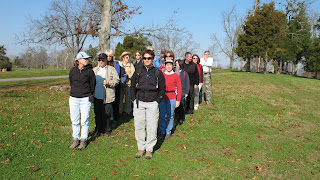 Near the Widow Gibson cabin (Stop 22), the full crew, still smiling. Of course the biggest hills are still awaiting us, I knew that, but they didn't. 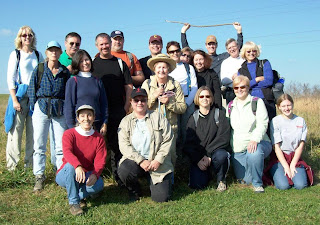 The view from Tour Stop 26, a beautiful and quiet area. The climb up the hill is worth the view. 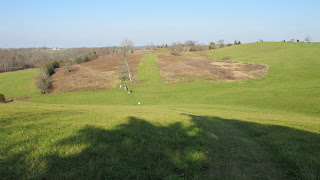 All in all, a perfect trip. It has motivated me to make this blog more active, as well as research Ohio units who fought at Perryville. I am also thinking about a detailed tour guide that folks can carry that would elaborate more on each tour stop.

Look for more good things over the next few months.
Posted by Darryl at 8:57 AM