A listing of known unit histories follows, with the most recent history being listed.  If you know of any not listed here, please email me.  Titles in bold are ones that I own, would like to find copies of the others.

We Were The Ninth. A History of the Ninth Regiment, Ohio Volunteer Infantry April 17, 1861 to June 7, 1864. By Constantine Grebner translated and edited by Fredrick Trautmann. Kent State University Press. Kent. Ohio. 1987

Record of the Ninety-Fourth Regiment Ohio Volunteer Infantry in the War of the Rebellion. Prepared by a Committee of the Regiment. The Ohio Valley Press. Cincinnati. Ohio. ND.

That Body of Brave Men: The U.S. Regular Infantry and the Civil War in the West. by Mark W. Johnson. The Regular Brigade of the Army of the Cumberland, the 15th, 16th, 18th and 19th United States Infantry Regiments. Da Capo Press. Cambridge. MA. 2003
Posted by Darryl at 7:13 PM No comments: 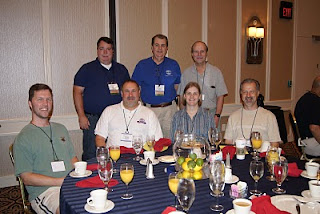 All I can say about my first Civil War Preservation Trust conference is WOW!  I attended talks, lectures, a panel discussion with Ed Bearss, Richard McMurry, and Kent Masterson Brown, and then was able to tour both Perryville and Mill Springs with Mr. Bearss.  The staff of the CWPT was friendly and helpful, and I met some excellent people on the tours who I look forward to seeing again next year at Manassas.

It was comforting to find that Mr. Bearss, noted historian and tour host, gave nearly the exact same tour as I give when leading hiking groups to Perryville.  I guess then I must be covering the basics!  We had sunny skies, then rain, then hail, then sun, then more rain, which might sound like a horrific experience, but instead made the tour of Perryville that much more memoriable.

Here is the link for the pics I have uploaded thus far on Flickr.
Posted by Darryl R. Smith at 11:22 AM No comments:

From the Civil War Preservation Trust:

(Perryville, Ky.) – At a land transfer ceremony this afternoon, the Civil War Preservation Trust (CWPT), the nation’s largest nonprofit battlefield preservation organization, formally donated 54 acres of hallowed ground associated with the October 1862 Battle of Perryville to the Commonwealth of Kentucky for integration into the Perryville Battlefield State Historic Site.

“Today we celebrate a great step forward for one of Kentucky’s outstanding historic sites,” said Tourism, Arts and Heritage Secretary Marcheta Sparrow, who accepted the donation on behalf of the Commonwealth. “The gift of this land will provide an enriched experience for visitors for generations to come.”

James Lighthizer, president of CWPT, remarked that the transfer’s timing as the opening event of the organization’s Annual Conference held this week in nearby Lexington was especially meaningful. “As illustrated by the presence of our conference in Kentucky this week, protected battlefields draw tourists who want to explore them in great depth,” said Lighthizer. “On the eve of the Civil War’s 150th anniversary, it is particularly important that we set aside such irreplaceable sites for the curious generations of the future.”

The Battle of Perryville, fought on October 8, 1862, was the largest battle fought in Kentucky and the culmination of Confederate Gen. Braxton Bragg’s invasion of the Bluegrass State. Although a tactical Confederate victory, Bragg retreated into Tennessee shortly thereafter, leaving Kentucky in Union hands for the remainder of the war. Coinciding chronologically with the Maryland Campaign in the war’s Eastern Theater, the failure of these twin Southern offensives constituted a major turning point in the war.

“The Battle of Perryville was had strategic significance for the war west of the Appalachian Mountains far beyond the size of the two armies actually engaged there,” said historian Kent Masterson Brown in his remarks. “The bold Confederate attempt to invade Kentucky was turned back, never to be attempted again. With all of Kentucky and much of Tennessee firmly in Union hands, it was only a matter of time before the Gulf States fell to Union forces.”

CWPT purchased the 54 acre property in 2006 at a total cost of $156,679, which was partially offset by a federal matching grant for historic landscape protection. Located on the southeastern side of the battlefield, the site marks where Confederate Gen. William J. Hardee launched assault against the Union center. From the high ground at the eastern end of the property, Captain T. J. Stanford’s Mississippi’s battery engaged in a lengthy artillery barrage with Gen. Don Carlos Buell’s Federal army.

According to CWPT Chairman John L. Nau, III, who also spoke at the event, it has always been the organization’s desire to see the land become Commonwealth property and part of Perryville Battlefield State Historic Site. The park already has plans to add walking trails and other educational and commemorative markers.

“At a battlefield where there is an existing park entity — especially one with such an outstanding reputation for excellence in stewardship and interpretation — we endeavor to preserve land that will augment and improve those ongoing efforts,” said Nau. “We are honored to be a long-term partner for the park, helping ensure it continues to grow and thrive.”

In total, CWPT has participated in the preservation of 385 acres at Perryville, and recently announced a new fundraising effort to place a permanent conservation easement on an additional 327 acres on the northern part of the battlefield. The Perryville Battlefield is widely renowned for retaining much of its 19th-century appearance, a quality particularly prized by heritage tourists and other visitors.

“This ground has remained largely unchanged for nearly 150 years and, in many cases, the descendents of those who tended the land in 1862 still work their family farms today,” said park manager Kurt Holman. “We are always very proud to say that if a Civil War soldier who fought here were to walk the battlefield today, he would say: ‘I know this place — this is Perryville.’”

Following the conclusion of remarks, Lighthizer and Nau signed a deed transferring control of the land to the Commonwealth, represented by Sparrow and Holman.

“On behalf of Kentucky Governor Steve Beshear and the entire Commonwealth government, I am honored to accept this generous donation from the trustees, members and staff of the Civil War Preservation Trust,” said Secretary Sparrow. “I pledge that we will be responsible stewards of this irreplaceable piece of our shared American heritage.”

The afternoon also included a first-ever public tour of the property led by Holman and Brown and a reception featuring light refreshments hosted by Friends of Perryville Battlefield.

The transfer ceremony was the first event in CWPT’s six day sojourn in the Bluegrass State. The organization’s trustees will meet in Lexington tomorrow, with the Trust’s Annual Conference kicking into high gear on Thursday. Hundreds of Civil War enthusiasts will participate in lectures, receptions discussion groups and in depth battlefield tours exploring numerous aspects of the war in Kentucky. Topics will include the Battle of Perryville, as well as the battles of Mill Springs, Munfordville and Richmond, as well as the raids of John Hunt Morgan.

With 55,000 members, CWPT is the largest nonprofit battlefield preservation organization in the United States. Its mission is to preserve our nation’s endangered Civil War battlefields and to promote appreciation of these hallowed grounds. CWPT has preserved more than 29,000 acres of battlefield land across the nation, including more than 1,500 in Kentucky. CWPT’s website is http://www.civilwar.org/.
Posted by Darryl R. Smith at 1:47 PM No comments: