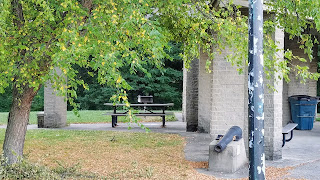 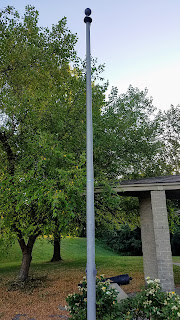 Just some additional pictures of the Lone Star Pavilion area in Burnet Woods, close to the University of Cincinnati campus.  I am meeting with the Cincinnati Parks folks next week to talk about volunteering at the site and what work I would plan to do. 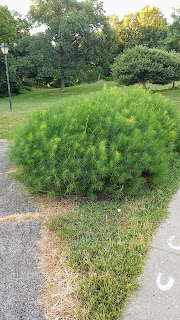 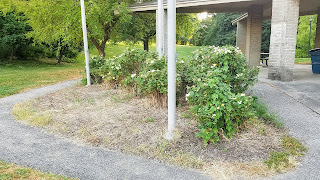 At the moment plans would be to rip up the garden area at the base of the flagpoles, turning the dirt over and adding some soil enrichment.  Planting of three types of plants, perennials known to be deer resistant, heat tolerant, and attractive to bees and butterflies, would occur next spring.

I would ask the park to repaint the light poles in the area, and fix the flagpoles themselves to allow flags to be flown.  I would also see if a permanent trash bin could be installed.  The gun tubes need to be sandblasted and repainted, but for now I would be happy with new paint.

Longer term plans would be to add some cherry and dogwood trees in the area to enhance the appeal of the location, hopefully leading to more rentals of the space.  The bush near the sidewalk needs to be either trimmed back, with additional plants on either side, or completely removed and a new garden or grass installed.  And there is an area that needs to have its undergrowth cleaned out to widen the viewshed of the pavilion area.

We'll see what the park will let me do!  Unfortunately the Sons of the Republic of Texas have not replied to two emails. 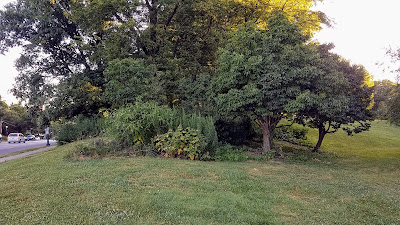 And Even More Events!

An updated listing as to what events and talks I have have coming up for the rest of the year.

8/11 - Potential private tour for a group at Perryville

I am also attending the Civil War Congress held in Harrisburg, Pennsylvania.  I hope for some great takeaways to use for both the Cincinnati Civil War Round Table and the Cynthiana Battlefields Foundation.

Followers and readers of this blog will know that I do go off on tangents every now and again.  This post is one of them.

Today my wife and I talk a humid walk around the Clifton area of Cincinnati.  For years I have been wanting to stop at the Lone Star Pavilion at Burnet Woods so we made an effort to include the pavilion on our walk.  The pavilion was dedicated in 1974 by the Sons of the Republic of Texas and has replicas of the Twin Sisters, two artillery pieces that citizens of Cincinnati raised money to send to serve in the Texas Revolution, also known as the Texas War of Independence.  These two guns (iron six-pounders, cast at the foundry of Hawkins and Tatum in Cincinnati) served at the Battle of San Jacinto, where Mexican General Santa Anna's force was routed in just eighteen minutes by Texans and other volunteers commanded by one Sam Houston, thus securing Texas as a separate republic.  As the United States were* "neutral" during the conflict, the guns were called hollow ware by the local citizens.  The location for the Twin Sisters sent to Texas is currently unknown.  Having bounded around Texas for awhile, they were used during the Civil War, and most likely present at the Battle of Palmito Ranch, the last major action of the war.

The pavilion in Burnet Woods is in need of some TLC.  It is weedy, the flower bed is a mess, grass cuttings left are on the sidewalks from our highly dedicated and motivated city employees, and no flags fly from the three flagpoles.  A beat up trash container sits along the walk to the street.  I didn't explore all of the area as there was a homeless person sleeping inside.  Burnet Woods as a whole is a pretty messy park, with honeysuckle and tons of poison ivy everywhere.  If only Cincinnati could spend money on parks instead of a streetcar, but I digress.  The cannon themselves need a good cleaning and new coat of paint.  Perhaps a more permanent trash receptacle could be installed.  Some dogwoods and cheery trees could make a nice backdrop, especially in the spring.

I am only about a ten or fifteen minute drive from the park.  With a wife who is a master gardener and works in the field of landscaping, along with taking care of another Cincinnati city park, I bet we could come up with a plan to at least salvage that garden area, creating bands of red, white, and blue flowers to signify the Texas flag.  I am wondering too if we could buy three flags and hoist them on the flagpoles - I think having a United States, an Ohio, and a Texas flag would be appropriate, yes?  There is easy street access to Clifton Avenue, so bringing in tools and flowers is a snap.  I do not believe there is water nearby, so whatever plants used would have to be drought resistant.

So, perhaps a new project, one that my wife and I could work on together.  Just don't tell her that I suggested it!  Wonder if there are any Sons of the Republic of Texas in the area who would want to assist?

* using the plural as before the Civil War the country was a collection of states, united.  After the Civil War the term became used in the singular form to indicate one country.
Posted by Darryl R. Smith at 1:00 PM No comments: