The Tragic Story of William McKnight

William McKnight was a member of Company K, 7th Ohio Volunteer Cavalry, during the Civil War.  McKnight was born in New Brunswick, Canada, on July 2nd , 1832.  His father Thomas was from Scotland, so William was a Canadian, of Scottish heritage, fighting for the Union, in an Ohio regiment.  McKnight was a resident of Rutland Township, Meigs County, Ohio, prior to the war.  On March 8th, 1855 he married Samaria Braley of nearby Langsville, and the union would produce six children, Leila, Thomas, Susan, Mary, and twins Martha and Myrta, the latter who were born on July 4th, 1863.  Prior to the Civil War McKnight earned a living as a blacksmith and would implore his wife to collect on debts owed by locals while he was awaiting for his pay while serving, as opposed to her obtaining from their families.

William joined the 7th OVC on September 12th, 1862 and was made sergeant on November 8th, 1862.  The 7th was known as the River Regiment as most of the companies were raised from men from counties along the Ohio River.  Organized at various locations around the state (Columbus, Ripley, Athens, Pomeroy and Gallipolis), the regiment served three years and was involved in numerous engagements and battles during the war.

During the Great Raid of 1863, John H. Morgan was chased across Ohio by the 7th Ohio, but McKnight was not with the regiment during this time as he was at Nicholsville, Kentucky training new men for the regiment.  On the raid Morgan's command passed through Langsville, where McKnight owned a house and Samaria and the six children, including the two week old twins, were living.  The story goes that Samaria was in the act of fleeing as she had heard that Morgan's men would not treat civilians respectfully, but Morgan himself reassured her that no harm would come to Samaria or the children.  While waiting for his command to complete crossing a nearby water obstacle, Morgan spent time conversing with Samaria.  Regardless, when William found out that Morgan was literally on his front porch, he became infuriated with the thought that the horse thief Morgan had the audacity to speak to Samaria.

At Cynthiana, Kentucky, during Morgan's Last Kentucky Raid, Second Lieutenant William McKnight* would have his chance to seek "revenge" on Morgan.  On the early morning of June 12th, 1864, the 7th Ohio Cavalry, part of Stephen  Burbridge's Federal force that had been chasing after Morgan, encountered the Confederates on the east side of town.  The resulting fight, which lasted about one hour, resulted in the complete rout of Morgan's men, and during the chase McKnight was mortally wounded on his left side.  He languished for a few days before dying.  In his pocket was found a poem he had written to Samaria in April, 1852.  The paper was stained, perhaps from William's mortal wound. 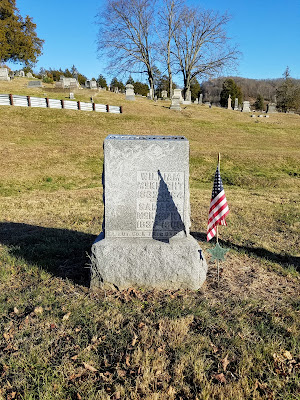 At home in Langsville was a twenty-six year old Samaria, and her six now-fatherless children, aged nine and under, including the eleven month old twins who would never remember their father.  Samaria never remarried, and was supported by her family, and later her daughter who lived with Samaria into her old age.

While certainly not the only soldier from Canada to fight during the Civil War, it is interesting to note that William supported the Union given his non-American background.  And while the Second Battle of Cynthiana is but a small footnote in the annals of Civil War history, his death left as much home front impact  as any fellow soldier killed at Chickamauga, or Shiloh, or Gettysburg. 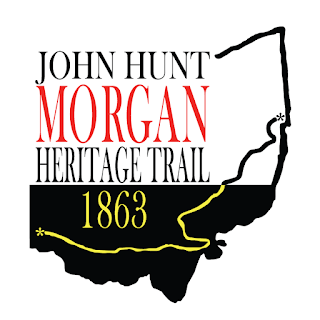 If you are like me, and seemingly the more Civil War aficionados I meet this holds true, you enjoy a good craft beer after a day of battlefield exploration.  The John Hunt Morgan Heritage Trail across Ohio is one long exploratory route, and it can take a few days to drive the route and peruse the interpretive panels along the way.  Stretching from Harrison on the Ohio-Indiana border, and ending near the Ohio-Pennsylvania border, the trail is over 500 miles long.  Driving the trail can be thirsty business, and this article is to provide you with breweries along the way to enjoy while pondering the Great Raid.

As these breweries are all nearly locally owned, there is an unfortunate possibility that they may not be in existence in the future as small businesses do come and go.  As of this writing these locations are open and ready for you to enjoy their craft beer offerings.  Let them know that you are driving the Morgan Trail when you stop in!  Also keep in mind that many of these breweries have limited days of the week that they are open for business - plan accordingly by checking their websites for open times.

We'll go county by county, following the trail from west to east.  There is also the five and dime rule - in larger urban areas the breweries listed are within five driving miles of the trail, while in rural areas the breweries are within ten miles.  And as many breweries often changing their taps, I will not provide a synopsis of what beers are available...let your own palette lead you based on the offerings of the day!

A few days ago I started a Facebook page on the 59th Ohio Infantry, raised from men (and perhaps two women) from Brown, Clermont, and to a lesser extent, Highland Counties.  Why did I start another Facebook page?  Because the more I learn and study about this regiment, the more I become convinced that a regimental history might be a good book project to tackle.  But, I also know that I am not the best researcher out there - I love learning, but digging in, and having the bulldog determination to see a project like this through is a bit daunting.  And really, where does one start?  How do I know what libraries and repositories might have information on the 59th?  Luckily knowing a few folks on Facebook who are Civil War experts is starting to yield some results, and it might lead to a collaborative effort with a noted author, who has offered to work on this together, if we find there is enough source and primary material to put together a good story on the 59th.  More on this later if it comes to fruition.

Because the men from the 59th were mostly from Brown and Clermont Counties, finding their graves has also become a bit of obsession for me.  I've already adopted the grave, through the Civil War Augusta Adopt-A-Soldier program, of Sergeant Nathaniel Yates, who is actually buried in Payne Cemetery in Augusta.  Yates must have moved to Bracken County after the war, and most likely with his brother, as I have also found the brother's grave in another cemetery outside of Augusta.  There are also another half dozen men from the 59th buried in Bracken County, and this really got the bug going for me.  To that end I have created a virtual cemetery on Find A Grave, and at this time have 132 men of the 59th listed.  I will visit as many of these men as I can, and do a little cleaning of their stone, so that their grave will attract a few visitors as we think about their stories.

UPDATE:  Now 210 men on the Find A Grave virtual cemetery.

Every day on my commute to and from work I pass through the crossroads of Dodds.  From the crossroads I can see the Dodds Cemetery.  Last year I decided to stop to see if there were any Civil War veterans buried there, and came across three men who served in Ohio regiments during the war.  While there, I did a bit of stone cleaning on the markers for these three men in an effort to help them stand out in this small cemetery, where dozens of vehicles pass every day.

Over the last few months I could look out my car window and see the white stone of one veteran stand out, and I knew that the clean up I did last year was successful.  His crisp white headstone is definitely something that draws the eye, and I hope that more people stop at Dodds to visit.

Today I stopped at the cemetery on my way home, and was surprised to see that someone had placed grave markers and flags for these three men.  I also saw close up the effects of my cleaning efforts.  I will say the stones are looking much better.

Where Did They Come From? Name Origin of Augusta Union Dead

Unlike most of Kentucky, which was settled from Virginia via the Cumberland Gap, the settlements along the Ohio River were founded by men and women not of Scots-Irish ancestry, but of mostly English.  The Ohio River route was traveled by those coming from the mid-Atlantic colonies and states of New York, New Jersey, and Pennsylvania, and the surnames of those men fighting in the Union home guard for the most part reflected that heritage.

Drake, Augustus C. - The name is either from Anglo-Saxon or Middle English origin and can mean dragon or snake.

McKibben, Alpheus - Irish (they are everywhere!).  The Gaelic form is Mac Giobúin.  Mc or Mac means "son of."

Story, William B. - Story is an old Norse name, which became ingrained in England as part of the numerous raids by the Norse, and occupation of parts of England.

Taylor, B.W.H. - Taylor stems from French and Latin and used in England as an occupational name. In Latin taliator means "to cut."

The Civil War Augusta group has an Adopt-A-Soldier program in place to mark those fallen Home Guard men. 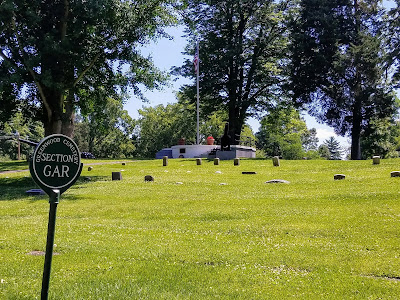 In doing research for the tour I am leading in October at Greenwood Cemetery in Hamilton, I am coming across some rather interesting stories of the Civil War veterans buried there.  I've been focusing mostly on the 35th Ohio and the various colonels, and have found quite a few men who were discharged during the war that came home and passed away while the war was still raging.  I also have come across a story of a veteran who, after the war, was in a small town in the north part of Butler County, missed the train to take him home, decided to walk along the rails to the next town, and was killed on the tracks by the Chicago express.  The accident took place between two towns where a curve in the tracks was located which is why the train did not see the veteran until too late.  Now, I question this a bit.  Having spent my younger years a few miles from this location, there is only one slight bend on the rail line, and the sight lines are rather long.  Now, in the later portion of the 1800s there may have been more trees along the tracks, blocking the view from the engine...plus a train, especially an express train moving at presumably a higher speed, cannot stop on a dime.

The rail line was not likely moved in the intervening years as the valley it runs through is constricted in some areas by a creek.  And of course the area may have been more wooded in the past, but the land there has been farmed for generations so most likely was farmed when the accident occurred.

I am purposely being vague with details as I will be sharing the full story during the tour.  It is far more interesting than what I have shared thus far.
Posted by Darryl R. Smith at 7:26 PM No comments:

I am working to become a docent at Spring Grove, hoping to lead some Civil War tours there that focus on the colonels and some generals a... 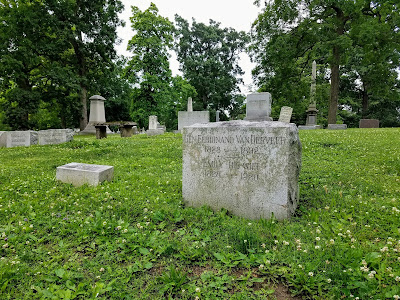