Something I have come across a few times is a reference to the Dry Canteen Trail.  This is/was a Boy Scout "trail" that takes Alexander McCook's I Corps path from Mackville to the battlefield.  I've been doing a bit of searching, and was able to get some great info from Perryville resident Sam Reid.  First, the old map. How about a patch for completing the trail?  Scouts had to walk the trail with empty canteens and were not allowed to stop by locals' homes to ask for water, in an effort to recreate and understand the hardships that McCook's men went through during the drought ridden summer of 1862.  Of course, being a hiker and backpacker, this about one of the worst things one can do (hike without water), so encouraging scouts to not drink water is not a wise decision.  Hopefully they have lifted that restriction a bit! 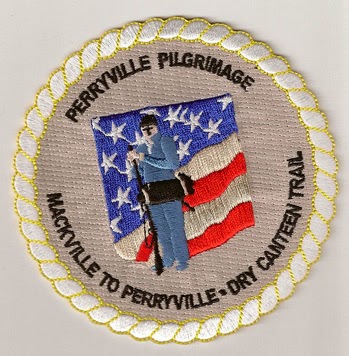 Here is the route of the Dry Canteen Trail from Mackville to the park.  Just a bit under ten miles, mostly on roads. 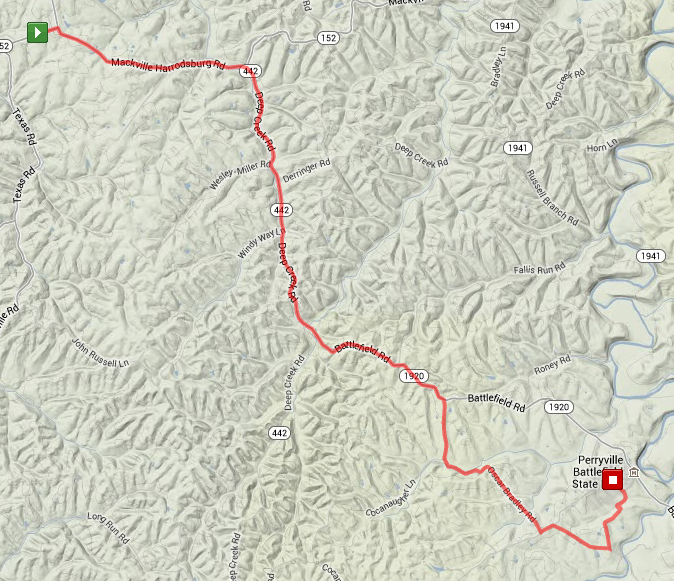 I am thinking that for future walking tours at Perryville I might offer this walk as the Friday warm up to the Saturday main event.  It will involve some car shuttling, but it does offer a) exercise and b) a chance to interpret a bit more of October 8th to those that may be interested.
Posted by Darryl R. Smith at 1:14 PM 8 comments:

Having spent another glorious weekend at Chickamauga for the Seminar in the Woods, I have decided to focus even more on the American Civil War than before.  To that end I went through my bookshelves and cleared out numerous book on other subjects so that I could expand my Civil War library.  Seven bags to Half Price Books later, I have open shelves to refill!

I am going to try to focus my future purchases on more reference material on Perryville as well as western battles in general.  On the way to Chickamauga I picked up a two volume set on Stones River (The Stone's River Campaign 26 December 1862 - 5 January 1863), written by Lanny Smith.  These two volumes of around 800 pages each cover Stones River in such great detail I will be able to sell my Cozzens book on the battle.  As Stones River is the next battle for the Army of Ohio/Cumberland after Perryville, having details on many of the regiments that shared both battles on their banners is quite exciting.

I've also picked up a copy of The Battle Rages Higher, which is a recent regimental history of the 15th Kentucky Infantry.  Like many Kentucky regiments, many of the men that served within the 15th's ranks were from Ohio, which alone is interesting to me, but the 15th also played a pivotal role at Perryville so reading this title is adding details and enhancing my knowledge about the 15th and Perryville, something I hope to share more on the walking tours.

On the way from Amazon are two additional Perryville related regimental histories, one on the 24th Illinois and the other on the 42nd Indiana.  The latter regiment is rather well known at Perryville for their getting caught in Doctor's Creek with stacked arms as the Confederates launched their attack on McCook's right.  The 24th Illinois, a German regiment, receives scant mention in the general Perryville story, so I am hopeful that the regimental history will give me some salient points to cover on the walking tours.

For other western topics, I have three more books on their way.  Another regimental on the 36th Ohio (Crook's Regulars), a book covering the Battle of Campbell's Station (part of the Knoxville Campaign), and an interesting title called The Civil War in the Big Sandy River Valley.  This latter title covers some of the small battles and skirmishes in Eastern Kentucky like Ivy Mountain and Middle Creek.

On pre-order I also have Dave Powell's first volume of the Chickamauga Campaign (A Mad Irregular Battle) and Stuart Sanders' Maney's Confederate Brigade at the Battle of Perryville.  Dave is one half of the Chickamauga Study Group leadership (along with Park Historian Jim Ogden), and Stuart served many years as director of the Perryville Enhancement Project.  Stuart's Perryville Under Fire is a well-written account of the post battle sufferings the local communities went through, so I know that his forthcoming book will be excellent.  Dave has written a few books already related to Chickamauga, and the level of knowledge he shares about Chickamauga I am certain will translate well to his epic campaign history.  Heck, when Dave's books are published I will be able to sell my Cozzens Chickamauga book as well!

So, a rather drastic move to clear my shelves has turned into a buying frenzy!
Posted by Darryl R. Smith at 9:47 AM 4 comments: