The next meeting of the nascent group trying to increase awareness of the Civil War in Augusta, Kentucky will be meeting at 1:00 p.m., December 15th, at the Augusta Irish Pub.  If you want to get involved with a true grassroots cause, this might be the one for you!  All are welcome as we plan a tour day in April and an anniversary event for September, 2019.
Posted by Darryl R. Smith at 8:28 PM No comments: 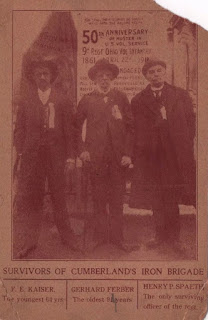 Over the years I have been naturally drawn to the local Federal regiments from my region, principally the 35th Ohio and 9th Ohio Infantry.  The former was heavily recruited in Butler County, where I grew up, and the latter of course was a fine and fairly known German regiment raised in Cincinnati.  I have regimental histories on both regiments (with a new book on the 9th Ohio in the works by Cincinnatian Andrew Houghtaling).  Of late I have also started to collect titles on the other core regiments of the brigade, notably the 2nd Minnesota and 87th Indiana.  The brigade went through a few transitions, with the Eighteenth U.S. Regulars being a part during the Kentucky Campaign, and the 75th and 101st Indiana and 105th Ohio Regiments (the latter heavily involved at Perryville and Chickamauga) added to the brigade in time for Missionary Ridge.  And during certain periods the brigade had its own battery, the 4th U.S. Light Artillery, Battery I.

The brigade did not experience battlefield glory as a brigade until Chickamauga, but at various times regiments from the brigade had fought well prior to the fall of 1863, notably the 9th Ohio (carnifex Ferry and Mill Springs) and 2nd Minnesota (Mill Springs).  While present at Perryville, the brigade arrived late in the day on October 8th, and saw little fighting, which resulted in only fourteen casualties for the entire brigade.  The brigade was not present at Stones River, so it is the Tullahoma Campaign and the Battle of Chickamauga that sees the brigade fighting as one distinct unit, heavily engaged numerous times throughout the battle.

Oh, that Iron Brigade moniker?  Take a close look at the reunion picture above, then check out my friend Richard McCormick's blog post about Cumberland's Iron Brigade!

This interesting brigade has several titles available for those wanting to learn more.  I have a few titles in my collection on the "Iron Brigade" as follows:

A Stupendous Effort: The 87th Indiana in the War of the Rebellion - Jack K. Overmyer, Indiana University Press, 1997.

The Story of a Regiment: Being a Narrative of the Second Regiment Minnesota Volunteer Infantry in the Civil War of 1861 to 1865 - Judson W. Bishop (edited by Newell L. Chester), North Star Press of St. Cloud, 2000.

We Were the Ninth: A History of the Ninth Regiment, Ohio Volunteer Infantry, April 17th, 1861, to June 7, 1864 - Constantine Grebner (translated and edited by Frederic Trautmann), Kent State University Press, 1987.