An overdue post as part of my Ohio at Perryville series....

Organized by Colonel Ferdinand Van Derveer in August and September of 1861. It served in Kentucky and in 1862 served in Tennessee and at Perryville.  The regiment fought at Chickamauga losing nearly 50% of its men while being one of the last regiments to leave Horseshoe Ridge.  It charged Missionary Ridge (where Henry V. Boynton earned a Medal of Honor) and served under Thomas in the Atlanta Campaign, taking part in the battles of Dalton, Resaca, Pine Mountain, Kennesaw, Peachtree Creek and several other engagements of that campaign.  The 35th mustered out of service in August, 1864, at Chattanooga. 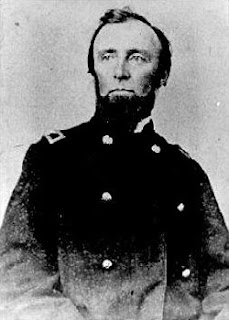 Commander - Ferdinand Van Derveer (Colonel). Born February 27th, 1823 in Middletown, Ohio.  He was educated at Farmer's Collage in Cincinnati, and had a law practice prior to the war.  He served in the First Regiment Ohio Volunteer Infantry in the Mexican-American War, and served as a second in a duel between Carr B. White and James Perry Fyffe during the return to Ohio (both of the duelists would serve as colonels during the Civil War).  Van Derveer would resume his law practice and serve as Butler County sheriff.  He became colonel of the 35th OVI on September 24th, 1861.  He mustered out with the 35th, after serving as brigade commander.  In January 1865 he was reappointed in the army with the rank of brigadier general and commanded a brigade in the IV Corps until resigning in June of that same year.  He returned once again to his law practice,  and would serve as judge in the county court of common pleas.  Van Derveer would pass away on November 5th, 1892.  He is buried in Greenwood Cemetery in Hamilton, Ohio, along with dozens of his former comrades from the 35th.  Van Derveer was instrumental in the early efforts to memorialize Chickamauga as a national park. 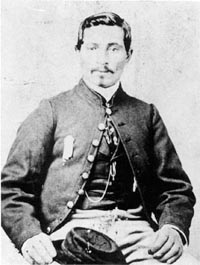 Exploring cemeteries and finding stories has been a more recent interest of mine, so forgive me for not visiting a Medal of Honor recipient that lives within a mile from where I live (as the crows flies).  Today I decided that a) I desperately needed some exercise, and b) it was a perfect opportunity to walk to the local cemetery where this man rests.

Born in 1843 in Lautenberg, in West Prussia, today part of Poland, David Urbansky (or the roster as Orbansky) emigrated to the United States with his family at the age of 15.  His stated profession was cabinetmaker.  After living in New York for several years, Urbansky moved to Columbus, Ohio.

On October 28, 1861, six months after the war began, Urbansky enlisted as a corporal in the Fifty-Eighth Ohio Volunteer Infantry, a regiment that was under the command of Colonel Valentine Bausenwein.  (Most of Urbansky’s Company B was German speaking)

Urbansky’s war records shows that he saw action in at least fifteen battles.  These included Fort Donelson and Shiloh.  At Chickasaw Bayou, the Fifty-Eighth participated in the one of the earliest attacks on Vicksburg, the last remaining Confederate stronghold on the Mississippi River.  When his superior officer was badly wounded, and stranded in no-man’s land, Urbansky, who was all of five feet three inches tall, came to his aid and, braving heavy fire, carried him back to safety.  The officer survived.  I am still researching to see who that officer might have been but I believe it was Captain Ferdinand Fix who was wounded on December 29th, 1862.

After the war, Urbansky, whose commander Captain Louis Keller, praised him as “a man of honor and bravery,” became one of 134 Ohio soldiers to be awarded the Congressional Medal of Honor, the country’s highest military honor, awarded for personal acts of valor in action against an enemy force, and one of only six Jewish Union soldiers to receive the recognition.  Today, Urbansky’s medal is in the collection of the National Jewish Archives, in Cincinnati.

Urbansky was discharged from the army with the rank of private (having been reduced to the ranks on April 8th, 1862, the day after Shiloh), on January 14th, 1865.  He then applied for, and quickly was granted, American citizenship.  A short time later, he married Rachel Henry, from Schenectady, New York.  They made their home, and raised their 12 children, in Piqua, a small city east of Dayton, Ohio, where David owned a successful clothing store. 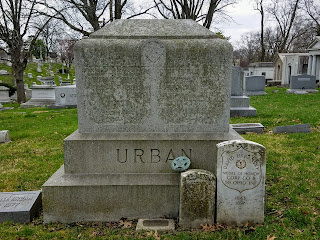 After a long illness, Urbansky died, and was buried in the Cedar Hill Jewish cemetery in Piqua.  After his death, Rachel and her children moved to Cincinnati and shortened the family name to Urban.  She died in 1925, and after her burial in the Walnut Hills United Jewish Cemetery, David’s remains were re-interred by her side.

Unlike many Civil War soldiers who received their Medals of Honor through political patronage in the late 1800s, Urbansky's medal was awarded on August 2, 1879.  "The President of the United States of America, in the name of Congress, takes pleasure in presenting the Medal of Honor to Private David Orbansky, United States Army, for extraordinary heroism in 1862 & 1863, while serving with Company B, 58th Ohio Infantry, in action at Shiloh, Tennessee & Vicksburg, Mississippi, for gallantry in actions."