The Boys From Butler County 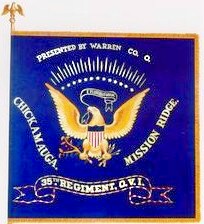 As I have mentioned in previous posts, I am from Butler County, Ohio, sandwiched between Cincinnati and Dayton.  During the Civil War the population of the county was about 36,000, and the men from the county did more than their share when it came to serving in the war.  Here is a breakdown of units and companies that were raised in Butler County:

Taking the above, if each company is 100 men, then Butler County contributed at least 3,000 men, or 8.33% of the county population, to the war effort.  That 3,000 number would be very much on the low end, as more recruits were added to units as the war progressed.  For example, the 35th Ohio had a total of 1,700 of men that would eventually be on its muster rolls, even though a regiment was supposed to be 1,000 men strong.

Next post I will mention the other regiments that had Butler County men serving, just not as full companies.
Posted by Darryl R. Smith at 2:33 PM