A podcast on Morgan and his First and Last Kentucky Raids, with a focus on the battles of Cynthiana, on the Untold Civil War.  Thanks to Paul for having me on!

Saving this great post by Dan Masters here for my, and your, reference!

Due to the fact I am now involved with a new website/blog (The Western Theater in the Civil War), my posts here will be far and few between as I focus more on this new endeavor.  It has been a fun ride here, and I will still post on occasion, but most of my blog posts, as related to the Western Theater, will be on the new site.  Stop by there when you can, and one can leave comments there as well.
Posted by Darryl R. Smith at 9:53 PM No comments:

Email ThisBlogThis!Share to TwitterShare to FacebookShare to Pinterest
Labels: Western Theater in the Civil War

Some additional notables who served in the First Regiment Ohio Volunteer Infantry Regiment during the Mexican War.

August V. Kautz - West Point 1852.  Colonel 2nd Ohio Cavalry, later brigadier general and led a division in the Army of the James.  Major general of volunteers.  Served on the board that investigated the Lincoln assassination conspirators.

George P. Webster - Major in the 25th OVI, Colonel of the 98th Ohio, and killed in battle at Perryville.  Ancestor of former FBI director William Webster. 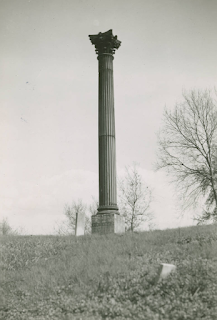 Close by to where I now work is Cincinnati's oldest cemetery.  Known variously as Columbia Church Baptist, Columbia Pioneer, and Pioneer Memorial, it is the final resting place for 180 people, including Revolutionary War, War of 1812, and Civil War veterans.  Maintained (poorly I might add) by the Cincinnati Parks Department, the cemetery is located across from Lunken Airport.  It has honeysuckle invading the fence lines, garlic mustard in patches, stones that need to be reset, other stones that need to be cleaned, and a regular and effective mowing schedule.  I have reached out to the parks three times now to suggest a friends group be formed, but no reply from our beloved city employees.

There are also newer veteran stones at the cemetery, placed in a plot near the walkway leading to the steps.  This was a project done by a local young man, who also was able to designate two parking places for wounded veterans.  Alas, two of the stones have incorrect information, and they are just placed on the ground, and there is a larger memorial stone with information about the groups involved in getting these newer stones placed.  After three attempts to reach out to them about the plan for these stones and this plot, and the fact that two of them are incorrect, I finally received a very non-committal reply about how they did the research (poorly as the men with incorrect stones are listed correctly on their older veterans stones, and a check of the rosters verifies this, as well as their graves registration cards), and nothing about the plan for the stones.  Terrible.

There will be more posts on this cemetery as I work on trying to get more awareness going and try to create some sort of support organization.
Posted by Darryl R. Smith at 12:42 PM No comments:

During the Mexican-American War Ohio raised five infantry regiments along with fifteen companies, as well as provided troops for the 15th United States Infantry and the Mounted Riflemen.  Reading through the various rosters is like a Who's Who of minor Civil War personalities, but perhaps none more so than the First Regiment Ohio Volunteer Infantry Regiment.  I might surmise that this single regiment of volunteers may have had a legacy unlike any other volunteer unit from the Mexican War.

Here are a few of the men who had an impact during the Civil War.  More in Part II.

Thomas L. Hamer - While Hamer did not survive the Mexican War, he did leave a lasting legacy.  It was Congressman Hamer who nominated one Hiram Ulysses Grant to West Point.

James F. Harrison - Colonel of the 11th OVI.  West Point 1845.  Was with President William Henry Harrison when he died, as well as William H. Lytle when he was mortally wounded at Chickamauga.
Posted by Darryl R. Smith at 8:00 AM No comments: